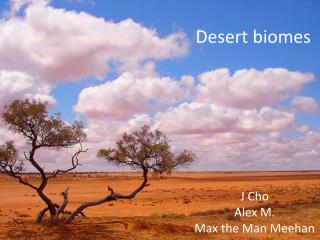 Desert biomes. J Cho Alex M. Max the Man Meehan. Hot and Dry (Temp.). The temperatures in the hot and dry deserts are extreme because of the lack of humidity Humidity- air which contains high amounts of water vapor Without humidity there is a lack of protection from the suns ray Desert and Tundra Biomes - . chapter 7. 7.1 deserts. objectives describe the characteristics of a desert explain how