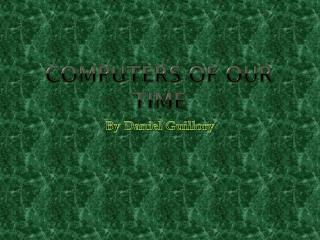 Computers of our time. By Daniel Guillory. History of Computers. Computers have been an important aspect of our lives for years. One of the first, “top of the line” computers was the Gateway G6-450. Since then, computers have become much more advanced. Importance of Computers in Our Lives - Business and technology have developed at a similar pace for a long time. the

CHALLENGE OF OUR TIME - . the ageing of population. baby boomers generation. traditional phases of human life. too

While our computers load…

Great People of Our Time - . by the community unity group. who was he?. he was a great man who fought for black people to

Great speeches of our time… - . speech  [ speech ]    speaking ability: the ability to speak communication by

Great speeches of our time… - . speech  [ speech ]    speaking ability:  the ability to speak communication by

How Computers Influence our Lives - . step 1: choose a product or service. think of a product in which the functionality

Can computers understand our language - Would life be easier if. you could tell the computer what you wanted and it

OUR FREE TIME - School number 4 presents. our free time. hello! we are pupils of 10 th form from school № 4 in

Our Time Together… - “ it is in fact a part of the function of education to help us escape, not from our own time —

The accumulating crises of our time - . &quot;a misunderstanding of exponential arithmetic is one of the most

The future of computers in our homes and schools - . david strom (revised 4/13) david@strom.com port parent, author,

The future of computers in our homes and schools - David strom (revised 4/13) david@strom.com port parent, author,

Our spare time activities - . here you can see a little of what we do when we are not at school. the boys’ hobbies.