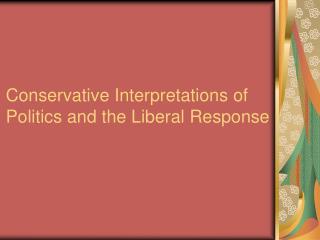 Conservative Interpretations of Politics and the Liberal Response

Conservative Interpretations of Politics and the Liberal Response. I. Traditional Conservatism. Principles

Conservative Interpretations of Politics and the Liberal Response

NATIONALISM, ROMANTICISM, LIBERALISM, AND CONSERVATISM - . the birth and growth of ideologies in europe. ideologies in

Ideology from the Liberal and Conservative Viewpoints - . january 10,2014 7 th grade government and civics mr. cole. do

To what extent did classical liberalism meet the needs of society? - . modern liberalism developed because people sought

Contemporary Challenges to Liberalism - To what extent is modern liberalism continuing to evolve? chapter 8 and chapter

Responding to Liberalism - To what extent are socialism and marxism responses to classical liberalism?. responding to

Chapter 9 - Public Opinion - Characteristics - . ap government. in a democratic republic like the united states, where

Ideology: Liberalism, conservatism, and the darker side of politics - . ideology. a set of beliefs, attitudes, ideas,