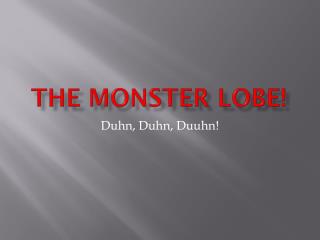 The Monster Lobe!. Duhn , Duhn , Duuhn !. This is a STEM Problem!. How do we stop the Monster Lobe? Build a wall? Build a tunnel? Refreeze it? Deflect it? Bury it in concrete? Move the Road? Raise the pipeline ? Minimize Climate Change?. This a STREAM Teaching Moment!. Science

Chapter 27: “Expansionism” but what we really mean is empire! - . frankenstein’s monster and the “curse” of

REVIEW OF HEAD AND NECK - . i. embryology. i. early development - head and neck developement differs from rest of body.

Psychology 100 Chapter 4 Sensation &amp; Perception - . when the monster came, lola, like the peppered moth and the