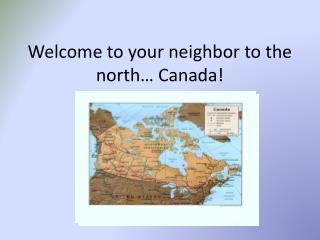 Welcome to your neighbor to the north… Canada!. Instead of states, Canada is divided up into 13 regions called, provinces or territories. Canada Overview. Canada is the second largest country in the world, after Russia. Due to its vast area Canada features a variety of climates and terrains. Who Is My Neighbor? - . may 31. think about it. what is the difference between a noun and a verb?. jesus and an expert in

Chapter 1 Review - . section 1 part 1. where in the world is the us and canada what bodies of water border canada

By: Austin Sparks - . location. canada is on the continent of north america. the country stretches from the atlantic

Canada - . introduction . i will talk about where is it . how many people live in it. what language they speak . what do

North America - . describing north america as a realm. consists of canada and usa (hawaii excluded). major cities of the

Canada CRCT Review - . physical features of canada. north of the us surrounded by the atlantic, pacific, and arctic

Canada - . it’s canada. canada's area is about 10 sq km. canada is a very big country. it washed by the pacific ocean

Everything you wanted to know about Canada, but were affaid to ask - . http://www.youtube.com/watch?v=yi1yhp-_x7a. the

Unit 16 The United States of America - . uncle sam. america lies in the south of north america. it is surrounded by the