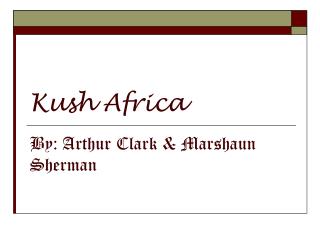 Kush Africa. By: Arthur Clark & Marshaun Sherman. Geographic Location. Kush was a civilization centered in the North African region of Nubia, located in what is today northern Sudan. One of the earliest civilizations to develop in the Nile River Valley. Kush Religion,. Kush - . kush and egypt: trading partners. why travel was difficult between partners nile had many cataracts between them

Vladimir Kush - . focused on the space in art. this is the departure of the winged ship, . &amp; the

KINGDOM OF KUSH - . by: awab hassan mohammed hassan mohammmed gabir . location of kush. stretched from south of egypt to

The Kingdom of Kush - . age of empires. background . kush was an african kingdom located to the south of egypt their

The Kingdom of Kush - . history alive: chapter 10. the geography of kush. kush is located south of egypt along the nile