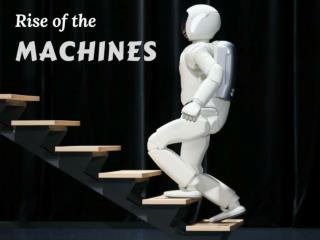 Rise of the machines

A look at the new generation of robot technology.

Rise of the machines

Rise of the Robots - Literacy reading stories about robots. the iron man – ted hughes harry and the robots – ian

The Factory System and Living &amp; Working Conditions - . chapter 13 section 2 and 3. i.) machines change the

Rise of the Machines - . jack concanon. “ a field of study that gives computers the ability to learn without being

The power of ideas Charles Babbage - . in july of 1822, babbage wrote a letter to the president of the royal society,

Work and Simple Machines - . what is work?. in science, the word work has a different meaning than you may be familiar

The Rise of Unions - . objective: explain the causes and effects of the industrial revolution with emphasis on- the

Chapter 12 – Work and Machines - . work is when a force is used to make something move. work = force (distance) work

Problems with the Rise of Industrialization - . by lizz lagatta and natalya kadziauskas. urbanization. overcrowded tenets

Can Machines Be Polite? - . michael a. covington artificial intelligence center. can machines be polite?. machines have