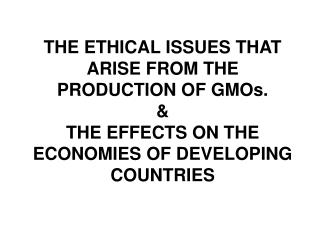 THE ETHICAL ISSUES THAT ARISE FROM THE PRODUCTION OF GMOs. & THE EFFECTS ON THE ECONOMIES OF DEVELOPING COUNTRIES. What is bioengineering:. Chapter 1 Carbon Compounds and Chemical Bonds - . introduction organic chemistry the chemistry of the compounds of carbon