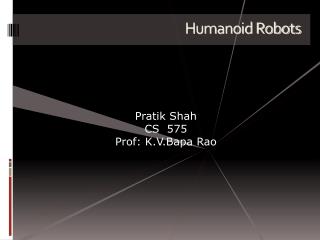 Humanoid Robots - Humanoid robot – a robot with its overall appearance based on the human body. gynoid – female,

Humanoid robots help autistic children - . outline. motivation of the creators autistic disorders a survey of the

HUMANOID ROBOTS USED FOR SURVEILLANCE - . by n.chandra sekhar 07481a0418. under guidance of mr. g.rama krishna. contents.

Improved Goalie Strategy with the Aldebaran Nao humanoid Robots* - . *this research is supported by nsf grant no. cns

How the IT System of the Humanoid Robots Works - . mohanad abdallah and nabil elassi. about the robots. these robots are