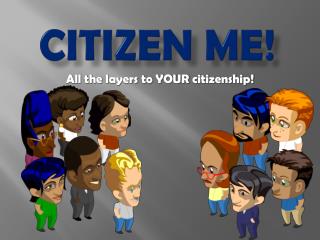 CITIZEN ME!. All the layers to YOUR citizenship!. I wonder what a CITIZEN is?. TAKE A GUESS!. A citizen is…. A. a person who does good deeds. B. someone involved in politics. C. a member of a community with rights and responsibilities. THANKS!. D. an adult. VOTING - . a right and a responsibility of citizenship. 18 years old u.s. citizen state resident mentally competent not a

AGORA - . a wide, open area in the middle of the city that served as a market place. assembly. the main decision-making