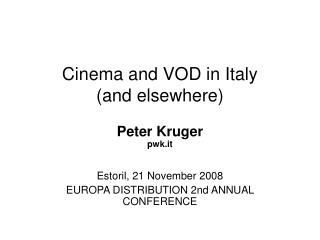 What Is Cinema: or When is a Movie More Than Just a Movie - . gary handman director media resources center moffitt

Enter the cinema of the future… - . digital technologies for the cinema industry. oddo midcap forum 2014 – lyon –

Let’s Learn About Italy - . www.flags.net/ital.htm. where is italy?. map of italy.

Italy! - Hello or ciao! i am here today to show you about italy! italy’s flag colours are green, white and red. italy

Feminist Cinema of the ‘80s and ‘90s - . patricia l. pecoy mll 235. major movements of this period. birth of feminine

Angles - . how does film affect population and vice versa why is everything so great in danish cinema cinema figures are

Dissertation Defense Presentation - . topic: a study of functional architecture of the internet protocol-television