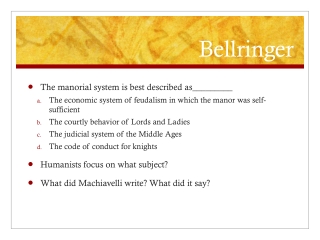 Bellringer. The manorial system is best described as_________ The economic system of feudalism in which the manor was self-sufficient The courtly behavior of Lords and Ladies The judicial system of the Middle Ages The code of conduct for knights Humanists focus on what subject?