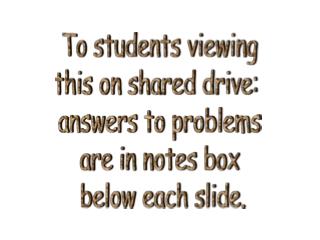 To students viewing this on shared drive: answers to problems are in notes box

To students viewing this on shared drive: answers to problems are in notes box - PowerPoint PPT Presentation To students viewing this on shared drive: answers to problems are in notes box

Common Core State Standards Mathematical Practices - . jeremy centeno. you would never hear someone say :. i am not very

Effective Learning Strategies - A range of my tried and tested ideas – all in one place and just for you!. assessment

This is ... - This is a template for you to use in your classroom. these notes will not appear on the actual slide show.

MODULE 2 Secondary A Year in the Life of a Data Driven School - . welcome back!. outcomes. participants will understand

Chapter 5 Study Guide - . researching and evaluating internet information. what is the internet? . a network of billions

Welcome to Today’s Webinar on Gifted Education October 27, 2009 This session will begin at 3:00pm and will stay open

Biology 221 Notes Exam I - . powerpoint 1. biolog y is the study of life. there are currently millions of extant (living)