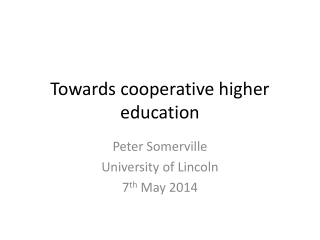 Higher education is associated with attitudes towards - “college major and preferences: the case of religion” +

COOPERATIVE EDUCATION - . frequently asked questions. how will we track your hours?. hours will be tracked on a time or

The Changes of Higher Education Towards Globalization - . president forum of southeast asian universities organized by

COOPERATIVE EDUCATION - . mr. gunby and ms. dunn-eckstein ms. pollice. what is your destination after high school?. what

Towards Excellence in Higher Education through Quality Awareness - Theme 2: different approaches to qa and their impact