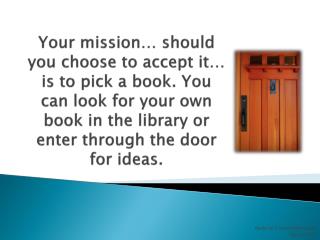 Your mission… should you choose to accept it… is to pick a book. You can look for your own book in the library or enter through the door for ideas. Made by V.VandenWyngaard Winter 2010. Some things to remember when looking for a book. The Fit Method F-Find a book that looks interesting Winter Institute 2010 - . slide one. we are in prescott, az you probably work for yavapai college you probably live in az

WINTER 2010 WEBINAR - . what will we be discussing?. new product launches new marketing concepts new merchandising for

Made by - . ryzhkova kristina and fomicheva veronika. the woman who disappeared. a visitor. my name is lenny