Plato’s (427-347 BC) View of Aesthetics from the Republic. - PowerPoint PPT Presentation 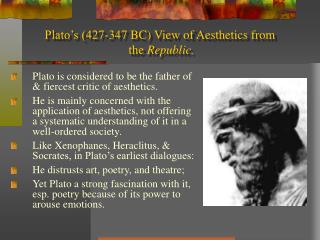 Plato’s (427-347 BC) View of Aesthetics from the Republic. Plato is considered to be the father of & fiercest critic of aesthetics. He is mainly concerned with the application of aesthetics, not offering a systematic understanding of it in a well-ordered society.

The Roman Republic - . objectives for this section : know the shift of rome’s government from monarchy to republic and

Plato’s Republic - . books 3 - 9. i. overview. i. recap the dialectic the city in speech the division of labor

The Weimar Republic - . war and revolution in germany. german generals knew they were losing asked kaiser for peace was