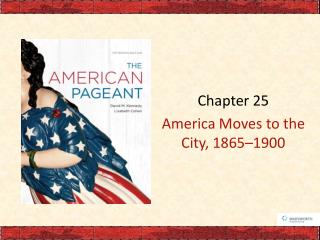 Chapter 25. America Moves to the City, 1865–1900. I. The Urban Frontier. The growth of American metropolises was spectacular: Size: In 1860 no city in the United States could boast a million inhabitants By 1890 New York, Chicago past the million mark