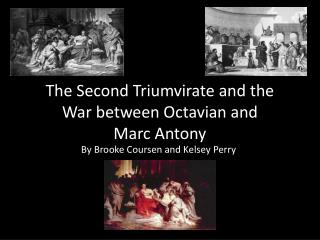 The Second Triumvirate and the War between Octavian and Marc Antony The Second Triumvirate and the War between Octavian and Marc Antony. By Brooke Coursen and Kelsey Perry. Where did it all start?. The Death of Julius Caesar

The Second Triumvirate and the War between Octavian and Marc Antony

The Second Triumvirate - . triumviri respublicae constitendua. the period from 44bc- 28bc. formation and breakdown of the

America and the Second World War - . history 17b lecture 9. a world transformed. from economic fears in great depression

The Second Punic War - . pars tertia – in italia. at last, in italy. hannibal loses about 30,000 men crossing the alps

The Second Punic War - . alps to italy. rhone to the alps. hannibal has only a short window of time to cross the alps.

The Relationship between Antony and Cleopatra - Cleopatra in egypt 44-41 bc once she returned to egypt, cleopatra

The Second World War - . the rise of fascism and militarism in japan, italy, and germany prelude to war: policy of

Mark Antony and Octavian - . by josh portman and chad yip. background information. caesar led a civil war against the

Slavery and The War Between the States - . antebellum northwest ordinance 3/5th compromise 20 year moratorium on slave