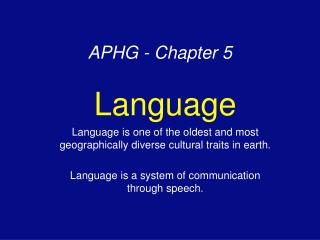 APHG - Chapter 5. Language Language is one of the oldest and most geographically diverse cultural traits in earth. Language is a system of communication through speech. French Road Signs, Québec. Origin, Diffusion, & Dialects of English. Origin and diffusion of English APHG - . chapter 1 key issue 1. deep thought. globalization vs local identity what are some examples of each? what are

APHG FRQ’s - . -let’s examine the past to predict the future…. assignment:. create this table on your own paper.

APHG CH 1 - . thinking geographically review. the science of making maps is . a) demography. b) cartography. c)

APHG Exam Review Jeopardy - . click for challenge!. this developer of an agricultural land use model supports that land

APHG INDUSTRIALIZTION: HISTORICAL GEOGRAPHY - Note: shift from wood to coal slide in this ppt. do not use this ppt if an

APHG CH 3: Migration - . population changes from the movement of people from place to place. geogra phers look at why

APHG Ch 8 Political Review - . language and _____ are two significant characteristics which distinguish among . a:

APHG Ch 9 Development Review - . ldcs can be distinguished from mdcs by all but. a: social factors b: demographic