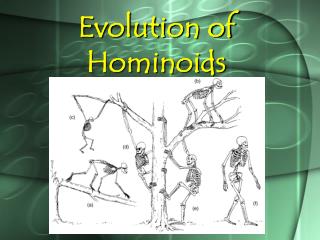 Evolution of Hominoids. Humans as Hominoids. The Hominoidea can be divided into 2 families: The Hylobatidae gibbons, referred to as lesser apes. The Hominidae great apes, humans and our early ancestors Ponginae orangutans Homininae gorillas, chimpanzees and humans. The Hominoids.

Human Evolution - . chapter 3. darwin and human evolution. lamarck posed the hypothesis about our relation to apes before

Hominin Evolution - . definitions. hominin – term that refers to humans and their extinct erect-walking ancestors. they

Chapter 12: The History of Life - . 12.1: the fossil record. objectives: describe the ways that fossils can form.

Archaeology - . what is archaeology?. one of 4 sub-fields anthropology study of ancient cultures through material remains

From Hominoids to Hominins - Accelerated, uplift-driven incision leading to increased sediments removal from the

Primate Evolution - This chapter introduces students to the study of the fossil record using geological techniques. then