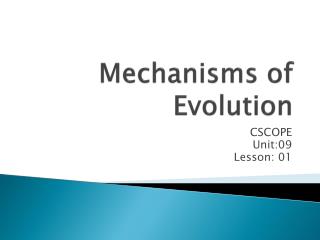 Mechanisms of Evolution. CSCOPE Unit:09 Lesson: 01. Evolution. The Theory of Evolution describes the slow change in organisms that occurs over many generations. Scientific Definitions Analysis:. Be prepared to share your response to the following: