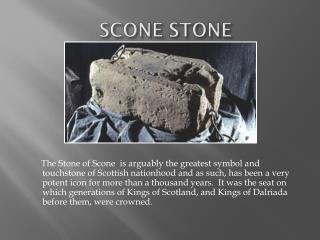 SCONE STONE. The Stone of Scone is arguably the greatest symbol and touchstone of Scottish nationhood and as such, has been a very potent icon for more than a thousand years. It was the seat on which generations of Kings of Scotland, and Kings of Dalriada before them, were crowned. . Four Seasons Scone - . divide the class into four groups and allocate a season (spring, summer, autumn or winter) to each

MUD STONE AND SAND STONE - . mud stone…one of sedimentary stone(taisekigan). they are formed by grains of rock smaller

Welcome to Harry Potter and the Philosophers SCONE - Harry potter. . malfoy has a dragon in his hand and is going to set

From model to service: relational databases and SCONE - . presentation to cdlr staff on wed 5 feb 2003 by gordon dunsire.

Ureteral stone - . ureteral stone. usually originates in the kidney majority of them are calcium oxalate stones.

STONE IDENTIFICATION - Marble has been treasured for centuries for both its beauty and utility. it's a natural limestone

Stone Fruits - . prunus is a genus of trees and shrubs, including the plums , cherries , peaches , apricots and almonds .

Ice Stone - Now ice stone to keep your wine chilled without water ice cubes. use this unique item as a gift for your