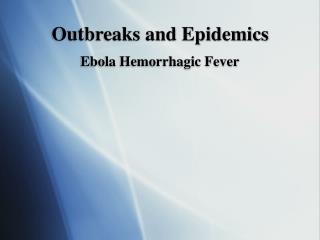 Outbreaks and Epidemics. Ebola Hemorrhagic Fever. Ebola facts and origins. Ebola hemorrhagic fever is a severe, often-fatal disease in humans and nonhuman primates (monkeys, gorillas, and chimpanzees) that has appeared sporadically since its initial recognition in 1976.

EPIDEMICS - . created by: divine, derrick, arely , shawna. what is epidemics?. a widespread occurrence of an infectous

Influenza – What in the world do YOU need to know? - . seasonal avian pandemic. influenza. acute, febrile respiratory

8.L.1.2: Understanding Disease Outbreaks - . by: cristopher a., sergio f., and camilo a. essential question. explain the

Influenza Outbreaks - . an overview for pharmacists prescribing antiviral medications under the collaborative drug

Can you figure out the next symbol in this series? - . history of microbiology. first epidemics. were possibly waterborne