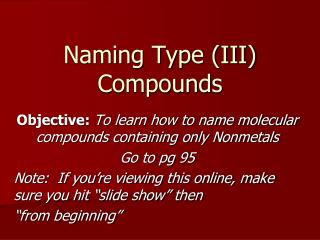 Naming Type (III) Compounds . Objective: To learn how to name molecular compounds containing only Nonmetals Go to pg 95 Note: If you’re viewing this online, make sure you hit “slide show” then “from beginning”. Latin Numbers. What is the name for ONE? Mono Examples Naming Ionic Compounds - . in order to communicate conveniently compounds need to be named unambiguously. . name the

Guide to Naming Ionic Compounds - . february 18. naming ions and ionic compounds. cations (+) the name of a cation is the

Naming Compounds= “Counting Stars” - . by: kristina w. and molly g . lately i been, i been losing sleep dreaming

Naming Ionic Compounds and Covalent Molecules - . ionic compounds do not use prefixes in naming. this is because the ions

Section 4.1: Naming Binary Compounds - . period 6 group #5. how do you name the compound pcl 5 ?. naming compounds that

Ionic Compounds and Naming - . chapter 4.10,4.11 and 5. when we begin combining elements we make compounds. two types

Chapter 8 Part 2 - . naming compounds writing formulas. systematic naming. there are too many compounds to remember the

Naming Compounds - . r ules for binary compounds. except for hydrogen, the element farther to the left in the periodic