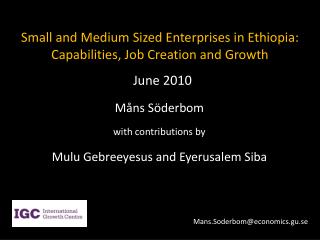 The road travelled, the road ahead - . a partnership i to champion sustainability in abu dhabi. csr in a dynamic economy

Competition Regime in Ethiopia: Preliminary Country Paper for the Capacity Building on Competition Policy in Select

Does a name really matter? - Wipo-aripo national seminar on intellectual property for the competitiveness of small and

Creation Science Fellowship, Inc One Year Creation Program - . session one the logic and theology of creation and the

Small Farm Beef Enterprises - . dr. john comerford penn state beef specialist. to get cattle to do what you want them to

There is another creation that men cannot see - . the bible claims that the unseen realm is the greater reality. (heb

Internationalization of Small and Medium-Sized Enterprises in Iran - . firouzeh ghanatabadi (2005). luleå university of