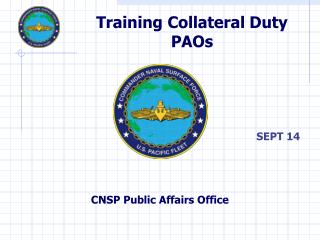 Training Collateral Duty PAOs. SEPT 14. CNSP Public Affairs Office. Marketing a Story to Local Audiences. Fleet Hometown News Program The “old way” of filling out a form for the FHTNC is a thing of the past. Don’t worry about the forms.! OFF DUTY SAFETY - . off duty safety. the responsibility to guard against both physical and health hazards extends beyond

From Arab Awakening to Regional Strength and Stability – the role of PAOs in the MENA Region - . jelil bouraoui ifac

Confronting the Collateral Consequences of Conviction - . cecelia klingele october 19, 2012. what is a “collateral”

Importance of Valuations – and All Other Inputs - in OTC Derivatives Collateral Management - . scott linden derivatives