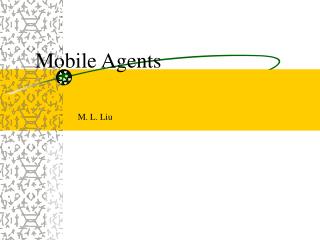 Mobile Agents. M. L. Liu. Introduction. Mobile agent is a distributed computing paradigm. It has become viable, with recent technologies such as those provided by Java. It has great potential for network applications. It has not been widely deployed. Mobile (transportable) agents. Mobile Agents - . introduction. mobile agent is a distributed computing paradigm. it has become viable, with recent

Mobile Agents - . by olga gelbart rosa@seas.gwu.edu. what is an agent?. a program (“software agent”), e.g.,

Agents &amp; Mobile Agents - . agents. an agent is anything that can be viewed as perceiving its environment through

Mobile Software Agents - . april 18, 2001. introduction: history. research on agents was originated by j. mccarthy in the

Collaborative vs. Mobile Agents - . a security overview on both infrastructure and ad-hoc networks carlisle house.