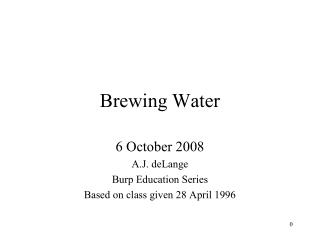 Brewing Water. 6 October 2008 A.J. deLange Burp Education Series Based on class given 28 April 1996. Perspective. The community (and I) have learned a few things about brewing water since 1996 (when I last gave this class) Then: Slavish attention to reproducing brewing cities’ ion profiles Brewing - . ingredients. water – must be well-filtered, and have the appropriate levels of calcium and other ions. ph

COMPETITION BREWING - . presentation by darrin sayers. agenda. what is a sanctioned bjcp competition why should you

Brewing 101 - . making good beers. home brewing can be a fun and a fairly inexpensive hobby. nothing is better than

All Grain Brewing - . brief introduction. overview. starches are broken down into sugars which are fed to a small colony

Beer Brewing carbondale - Hydroponics may be the farming of crops in a nutrient-rich solution instead of in dirt. it