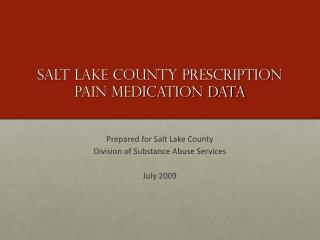 Salt lake county prescription pain medication DATA . Prepared for Salt Lake County Division of Substance Abuse Services July 2009. Overview. The Problem The Plan Who we talked to What we heard Overall Results Next Steps. The Problem. THE NATIONAL PROBLEM Salt lake County - . by: miss mccarroll. facts. county seat: a town or city that that is the administrative center of its

MLS Listing In Salt Lake County - If you are searching homes for sale in salt lake county. don't worry homelistingsutah

Fighting Prescription Drug Abuse in Lake County : - . a partnership in the community between the citizens, physicians,

Gout Pain Medication - There are so many gout sufferers available in the world that bear the terrific pain, swelling,