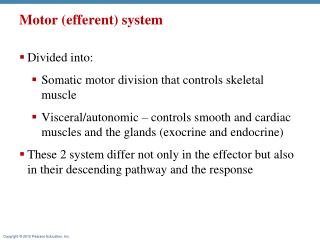 Motor (efferent) system . Divided into: Somatic motor division that controls skeletal muscle Visceral/autonomic – controls smooth and cardiac muscles and the glands (exocrine and endocrine) These 2 system differ not only in the effector but also in their descending pathway and the response.

CHAPTER 1 HUMAN MOTOR DEVELOPMENT – WHAT IS IT? - . greg payne. made by wang yan. §1.1 the discipline of human motor