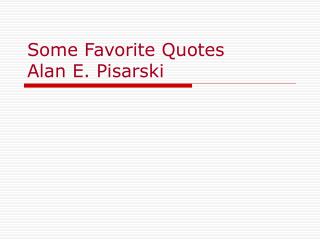 Some Favorite Quotes Alan E. Pisarski. On Public Policy. WHAT’S WRONG WITH THE AMERICAN PEOPLE. WHY DO THEY WANT WHAT THEY WANT? WHY CAN’T THEY WANT WHAT WE WANT THEM TO WANT? IF THIS KEEPS UP THE GOV’T WILL JUST HAVE TO ELECT NEW PEOPLE?.

Quotes - . integrating quotations. why use quotes in your essay? . the essay you write for class must be your essay. it

Language – Part I Notes - . tok. quotes. read the quotes on page 47 which is your favorite, and why? . language. one of