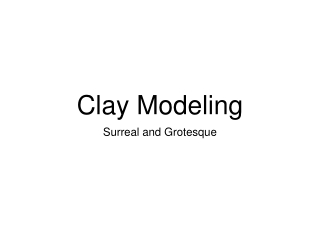 Clay - . terms and processes. preparing clay. wedging – a process of clearing air bubbles out of clay by slamming it on

CLAY! - . building methods. pinch -. shaping a clay bowl by squeezing it between the thumb and fingers. coil -. using

Clay - . what ? how ? why ?. ceramics. ceramic object made of clay and fired (baked). clay - an earthy material that is

CLAY - . carty 2013. chards. a chard is a historic or prehistoric fragment of pottery, although the term is occasionally

Clay - . clay. clay is a naturally material composed primarily of fine- grained mineral and water the combination of the

Clay sculptures - . shape &amp; form. shape and form define objects in space. shape has only height and width has two

Clay Stamps - Each student will make two clay stamps to use and share. please sketch your ideas in your journal. you need