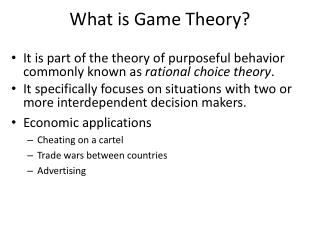 What is Game Theory?

What is Game Theory?. It is part of the theory of purposeful behavior commonly known as rational choice theory . It specifically focuses on situations with two or more interdependent decision makers. Economic applications Cheating on a cartel Trade wars between countries Advertising.

What is Game Theory?

Game Theory in Sports - . by: donté howell. what is game theory?. it is a tool used to analyze strategic behavior and

A Glimpse of Game Theory - . basic ideas of game theory. game theory studies the ways in which strategic interactions

An introduction to game theory - . today: the fundamentals of game theory, including nash equilibrium. today.

Game Theory - . “ if it’s true that we are here to help others, then what exactly are the others here for? ” -

Game Theory II - . definition of nash equilibrium. a game has n players. each player i has a strategy set s i this is his