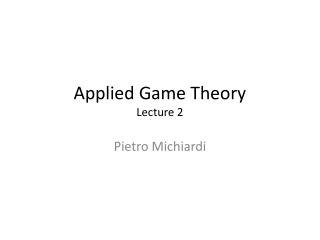 Applied Game Theory Lecture 2. Pietro Michiardi. Recap …. We introduced the idea of best response (BR) do the best you can do, given your belief about what the other players will do We saw a simple game in which we applied the BR idea and worked with plots. Soccer: Penalty Kick Game (1). Applied Game Theory Lecture 1 - . pietro michiardi. before we even start. the grade

Lecture 2: What is game theory?* - . formal analysis of strategic behaviour, that is, relation between inter-dependent

Game Theory Lecture Jan 18 - . in bertrand’s model of oligopoly. each firm chooses its quantity as the best response to

Lecture 2: Option Theory - . how to price options. the critical factor when trading in options, is determining a fair

Applied Organizational Theory - . introduction. how to form a framework for analyzing orgs?. question we will be seeking

Game Theory - . the study of rational behavior among interdependent agents agents have a common interest to make the pie