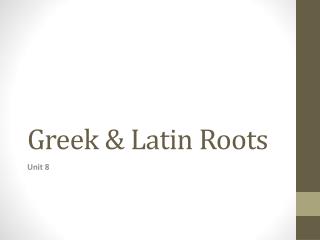 Greek & Latin Roots . Unit 8 . PORT. From the Latin word ‘ portare ’, portatum ’ To carry . Words from “ portare ”, “ portatum ” (to carry). Importune Verb; to urge or beg without end Dennis promised to importune Congress until the ban on concealed weapons became law. How Effective The Greek Alphabet Flashcards Are! - Learning the biblical script is a tough job. without a proper

The Greek polis was a city-state, - Sswh3 the student will examine the political, philosophical, and cultural interaction

GREEK THEATER - . sophocles,. and tragedy. warm up: pick up handouts from the front. get out colorful pens and

Greek Theatre &amp; the origins of Western Theatre - . ritual/storytelling. some believe that theatre grew out of

Greek I - . demonstrative pronouns/adjectives (chapters 13). overview of this lesson. in this lesson we will learn: the

Greek Cuisine - . the facts. the greek people. traditional greek cuisine ranges from salads to seafood to lamb and veal.

Greek Theatre - . myp unit question : how can elements of greek theatre still be relevant in a modern piece of theatre?.

Greek Weapons and Tactics - . the hoplite. named for the hoplon the shield he carries was private citizen and responsible

GREEK ART - . architecture. the greek temple. the greeks raised various different buildings in their cities and