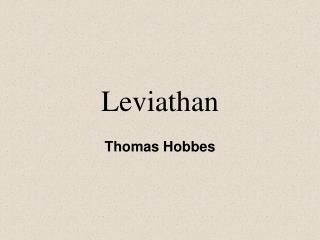 Leviathan Thomas Hobbes Thomas Hobbes (1588-1769) Son of a priest (who had to flee) was educated by a wealthy uncle. Thomas read and wrote at 4, learned Greek & Latin at 6, and went to Oxford at 15. Tutor of the Cavendish, had to live in exile more than once

Hobbes and the Leviathan - . 1651. hobbes’ question. how is social order possible? foundation of western political

What is Leviathan? - . job 41&amp; science in harmony. some people think leviathan was a crocodilian. let’s