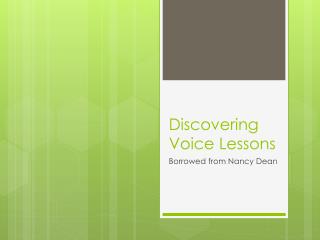 Discovering Voice Lessons. Borrowed from Nancy Dean. Diction. Read and Think: “A redheaded woman was there with Trout. Kate could see her rummaging through the cabin, dumping drawers, and knocking things from the shelves of cabinets. ~ Louis Sachar , Holes. Diction.