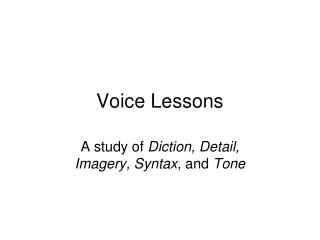 Voice Lessons. A study of Diction, Detail, Imagery, Syntax , and Tone. Voice. You learned to analyze voice when you were very young. “She really means it this time,” you whispered, conspiring in the intrigue of family “limits” Discovering Voice Lessons - . borrowed from nancy dean. diction. read and think: “a redheaded woman was there with