The Good Ol ’ U. S. of A - PowerPoint PPT Presentation 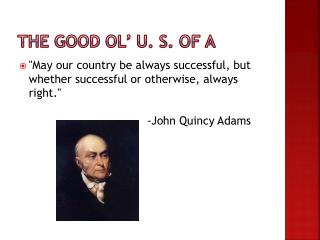 The Good Ol ’ U. S. of A. "May our country be always successful, but whether successful or otherwise, always right."  -John Quincy Adams. "Few men have virtue to withstand the highest bidder."  "Liberty, when it begins to take root, is a plant of rapid growth." -George Washington.

Using Good and Well, Bad and Badly - . remember. good and bad are adjectives. well and badly are adverbs. directions.

What is good? - . tell your partner an example of 1 object 1 experience 1 person which you would describe as “good”.

How to Have a Good Time in Portimão - . what to do portimão has a good cinema, if you like to watch a good movie. it

“If you can’t be a good example, be a good bad example.” - “i stand for freedom of expression, doing what you

SHENTON COLLEGE - . excellence, community and self. if you take only on thing away. most important part of this