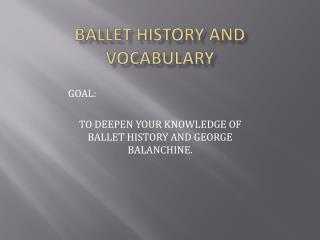 Ballet History and Vocabulary. GOAL: TO DEEPEN YOUR KNOWLEDGE OF BALLET HISTORY AND GEORGE BALANCHINE. BALLET. Where did Ballet begin?.

Word Up! Vocabulary Instruction in the 21st Century Classroom - This is my presentation to accompany my (one day) tier 2