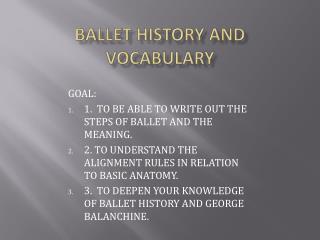 Ballet History and Vocabulary. GOAL: 1. TO BE ABLE TO WRITE OUT THE STEPS OF BALLET AND THE MEANING. 2. TO UNDERSTAND THE ALIGNMENT RULES IN RELATION TO BASIC ANATOMY. 3. TO DEEPEN YOUR KNOWLEDGE OF BALLET HISTORY AND GEORGE BALANCHINE. BALLET. Where did Ballet begin?.

My Ballet - . by i sabelle. here are some pitchers. my ballet class. facts about ballet. i go to briar i have a pink toto

The War with Grandpa Vocabulary Ch. 5-8 - . vocabulary in the war with grandpa ch. 5-8. advantage argument

Ballet and the Waltz - . *dance*. 3 basic elements of dance. space: the total area used by the performer. time: the total

SAT Vocabulary Chapter 5 - . how to talk about various practitioners. qod 03/04/14. think of words that could possibly go