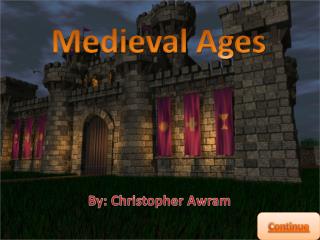 Medieval Ages. By: Christopher Awram. Continue. Main Menu. Start Game. Instructions. Credits. Back. Instructions. 1. Your job is to complete all the questions in each adventure. 2. If you want to quit the game then press Esc. on your keyboard.

Dancing in the Dark Ages (Middle Ages) - . what does the middle ages remind you of?. knights. castles!. periodization.

Medieval Times - . do now. why do you think historians would name an era the middle ages? it fell in the middle of

Medieval Europe aka Middle Ages - . 500-1250 ce. geography of europe. smallest continent on it’s own- but combined with

Education in the Middle Ages - . learning objectives. to know and understand the major events in education during the

The Medieval Period or The Middle Ages 1066-1485 - . the role of the church. a. physical protection. offered safe haven