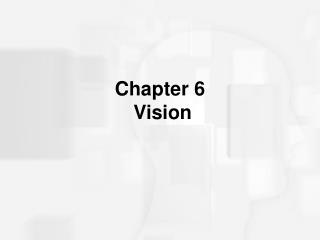 Chapter 6 Vision. Visual Coding and the Retinal Receptors. Each of our senses has specialized receptors that are sensitive to a particular kind of energy. Receptors for vision are sensitive to light. Receptors “transduce” (convert) energy into electrochemical patterns. Vision Chapter 6, Lecture 2 - . “color, like all aspects of vision, resides not in the object but in the theater of

Chapter 17: Vision - . overview of vision and the older adult. visual function and performance of adls safety

Chapter 9: Color Vision - . overview of questions. how do we perceive 200 different colors with only three cones? what