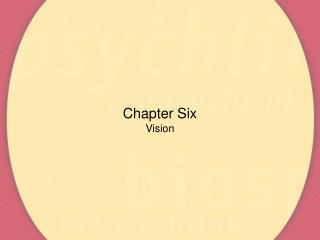 Chapter 6 The Great Gatsby - . when does james gatz change his name?. he changes his name when he meets the millionaire,

Psychology 100 Chapter 4 Sensation &amp; Perception - . when the monster came, lola, like the peppered moth and the

Chapter 3: Introduction to Vision - . light is the stimulus for vision. electromagnetic spectrum energy is described by

Chapter 3 Sensation and Perception - . chapter 3 overview. the process of sensation vision hearing smell and taste the

Fibers Chapter 6 - . fibers. fibers are made up of many filaments twisted or bonded together to form a thread. along with

Plato Vision - . who are we?. we are a contract school with cps through american quality schools. we have to use cps

Chapter 6: Participating in God’s Creation Part I Work has a value beyond what it produces Work is a basic human - It

Chapter Six: Inventory - . part four “the economic ordering quantity.”. how much inventory should we order?. we