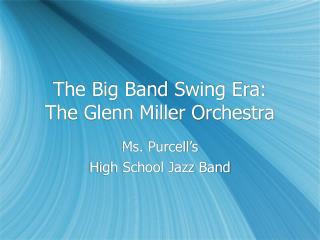 UMC Glenn Miller Ballroom 10-11:30 - . global climate change. has our use of fossil fuels, the basis of much of human

It’s Not Too Late to Sign Up for Band or Orchestra!! - . the are now new options available to music students that did

Creating a GUI with JFC/Swing - . what are the jfc and swing?. jfc java foundation classes a group of features to help

Have a Grand Time Swing Dancing to Live Music - You arenâ€™t going to be idle at a swing dance festival! this is