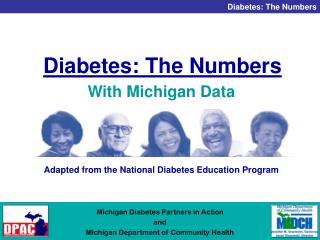 Diabetes: The Numbers. With Michigan Data. Adapted from the National Diabetes Education Program. What is Diabetes?. Diabetes is a group of diseases characterized by high levels of blood glucose (blood sugar) Diabetes can lead to serious health problems and premature death. MNT in Diabetes and Related Disorders - . expected outcomes of mnt in diabetes. ↓ of 1% of a1c in patients with newly

Back to Basics: Endocrinology Diabetes, Obesity and Thyroid - . diagnosis of diabetes. what are the cda criteria for the