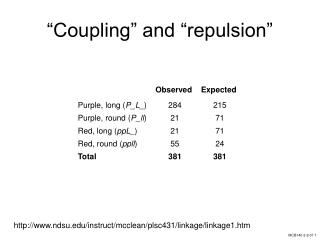 “Coupling” and “repulsion”. http://www.ndsu.edu/instruct/mcclean/plsc431/linkage/linkage1.htm. Back to Bateson and Punnett. What is going on? What can explain this “repulsion and coupling”? Why are these two genes disobeying Mendel’s second law?. Suzuki Coupling - . mechanism of suzuki coupling. gabriel synthesis. notice that the phthalimide moiety serves as a