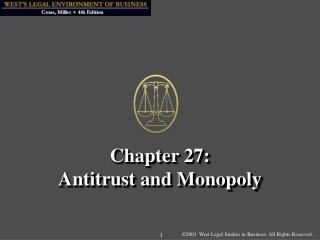 Chapter 27: Antitrust and Monopoly. Introduction. Generally, the law encourages innovation and competition among businesses to develop and sell more appealing products to consumers.

Creative Destruction: De-industrialisation - Or a ‘fashion capital for the creative industries’ in london yara evans

Monopoly and Antitrust Policy - Part iii market imperfections and the role of government. monopoly and antitrust

Chapter 13 Practice Quiz Antitrust and Regulation - . which of the following is illegal under the sherman act? a. Ch 11: Monopoly and Monopsony - . in the perfectly competitive market, the individual firm or consumer had no effect on

The Evolution of Telecommunications Technology and Policy - . chapter 3. objectives. in this chapter, you will learn to: