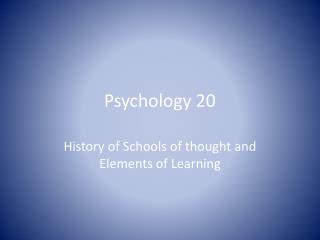 Psychology 20. History of Schools of thought and Elements of Learning. Defining Psychology. Observe the behaviour in the pictures on page 2 and 4. Observe the photo’s on pages 2 to 4 --- What types of behaviour can you identify? What visual clues did you see to formulate your answer?. PSYCHOLOGY 20 - . review from last week: definition of psychology what do research psychologists do? two elements of a

Psychology 320: Psychology of Gender and Sex Differences November 20 Lecture 27 - . announcement. due to unforeseen