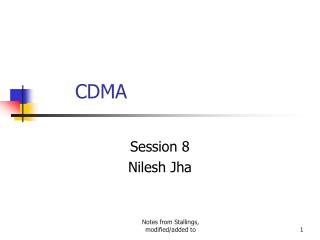 CDMA. Session 8 Nilesh Jha. IS95 CDMA. 1.25 MHz. up to 64 channels (is the number of orthogonal codes) code: 1.2288 Mchips/sec. Voice coder: 9.6 kb/s (really 8.55 kbps plus overhead) Cell power controlled at base stations to minimize interference (and near far problem). CDMA - . code division multiple access . is a channel access method both data and voice are separated from signals using

CDMA TECHNOLOGY - . instrctor: nazila safavi. what this course is all about?. what is multiple access?. what is a

CDMA Systems - . how does cdma work?. each bit (zero or one) is spread into n smaller pulses/chips (a series of zeros and